Looks like we'll have our white Christmas after all! Sunday we were hit by a massive winter storm. The south shore was hit real bad getting up to 2 feet in some places, while we ended up with a little under a foot.

The Doc had to work all day Sunday and since the boys and I were snowed in I decided to bundle them up and take them outside to play! 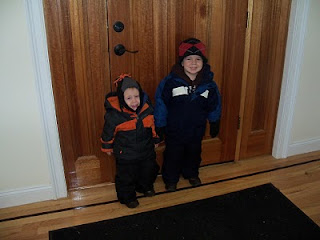 David LOVES the snow, he loves sledding and throwing snowballs (thanks, Uncle John). 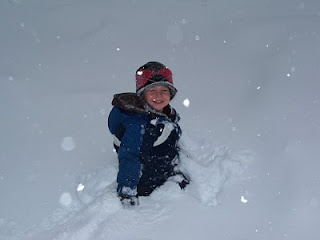 Shaun...not so much! It probably didn't help that he refused to keep his mittens on and when he fell his hands got cold. 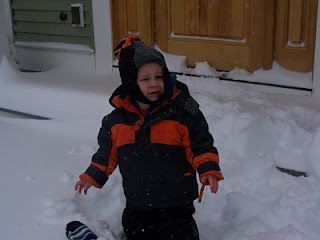 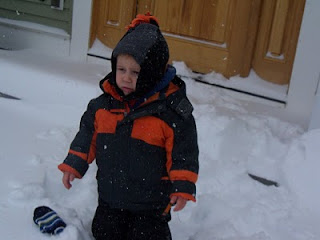 It was hard not to laugh at his meltdown. Poor kid...he was so mad at me that he decided to throw one of his famous tantrums (the kind where he falls to his belly and puts his face to the floor). He didn't take into account the snow on the ground this time and white-washed himself. I think he'll find he likes the snow if he keeps his mittens on!
Posted by Boston Pam at 4:19 PM 1 comment: 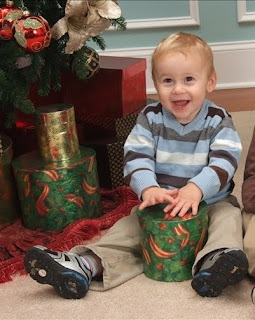 Today was Shaun's 18 month check up. He was a completely different child today! What a difference 3 months makes because this time he was laughing and smiling instead of screaming and crying!

Everything looked good. He is still behind on his speech but getting better and he is trying to say more and more words. He has his own way of communicating with us so he is not as frustrated as he was 3 months ago. As far as Shaun is concerned talking is overrated anyway! He would much rather climb into his own high chair using our kitchen table! He is also bigger than David was at 18 months, so David better watch out because Shaun is going to tower over him soon!

Ever since David was a doctor for Halloween he has been obsessed with everything medical. When he sees the Doc wearing his white coat...he says: "Mommy, Daddy is a doctor and I am a doctor!". He likes to check our blood pressure and our ears using his "doctor tools".

Today I had an appointment with the "Baby Doctor". This is only the second time seeing him, since every other appointment I see the Nurse Practitioner. He's really nice, but I've only met him once, so I didn't really have any particular feelings on if I would like him as my doctor. Well today he won me over! This was the first time I had to bring David to my appointment, since normally I can schedule them when he has playgroup or school so that I only have to bring Shaun.

He was very interested in the equipment he saw in the office, and my efforts to tell him NOT to touch anything went unheard. When the doctor walked in David started talking to him right away. He told him about how he was a doctor for Halloween and that he brought in his sheep that he got at a birthday party yesterday. He just kept right on talking. The OB was great and asked him questions, and even asked if he would like to use that Doppler that David couldn't stop eyeing!

His eyes lit up and so he hopped up onto the table waited for the Med student to squeeze the "jelly" on my belly. He then went to town trying to find that heartbeat! It didn't take him long, either, and when he heard the sound I had described to him earlier (whoosh, whoosh, whoosh) that morning he smiled so big at me. He was so proud of himself! The doc just let him keep on moving it around while he asked me some questions and we finished up the appointment. He was in heaven! It totally made his day, and he couldn't wait for Daddy to get home so he could tell him what he got to do at the doctors office!

We have another formal ultrasound in a couple weeks, and he'll get to come to that one (I didn't bring him to the first one). I think he's going to get a kick out of seeing the baby this time!
Posted by Boston Pam at 9:50 PM 1 comment:

Email ThisBlogThis!Share to TwitterShare to FacebookShare to Pinterest
Labels: pregnancy 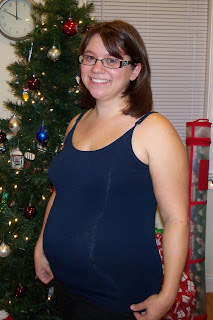 It's hard to believe that we are halfway to meeting baby Evan. It seems like yesterday I was just finding out that we were expecting. My pregnancies are (thankfully) so uneventful, that sometimes I forget I am even pregnant. I look forward to that first feeling of movement because it helps make it that much more real to me.

I remembered that with Shaun I felt him move just after our 18 week scan. I was hoping the same thing would happen this time as well. A couple days after our ultrasound I felt Evan move! This is the third time going through this and it still catches me off guard. It's the weirdest feeling, but also a really neat feeling!

The next big milestone will be when other people can feel him moving. I am pretty sure that won't happen until about 25 weeks but I don't really remember.
Posted by Boston Pam at 11:12 PM No comments: 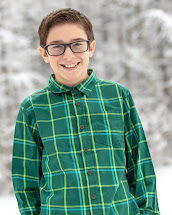 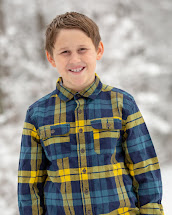 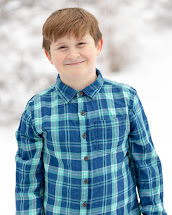